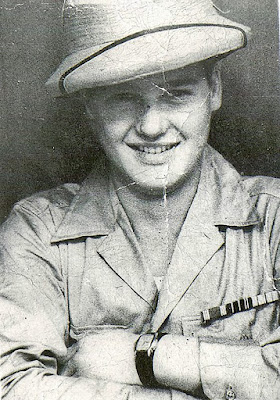 Since I was a little girl, my favorite picture has been of my dad during World War II wearing a pith helmet.  I had seen many pictures of soldiers and watched many war movies with my dad;  in my mind his headgear in the picture was unusual.  It certainly didn’t match anything I had seen unless the soldier was British.  I thought he was so young, handsome, and distinguished in that helmet!

George registered for the draft on 30 June 1942.  He was eighteen. This was a man who wanted to fight for his country and was determined to join two of his brothers and a sister in the fight. 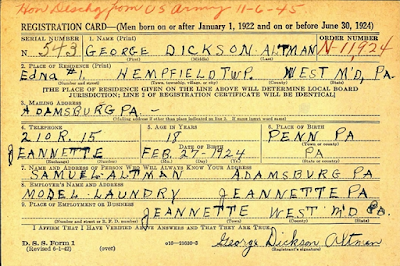 In April, 1943, at the age of nineteen George, known as Dick, began active service. In October he was on board ship for a twenty day trip to the African Middle Eastern Theatre.  He did not remain there for long as he volunteered for a secret and “dangerous one-time mission in an unspecified part of the world.”

Just before Christmas, Dick, along with 3,000 other volunteers, arrived in Ledo, India, to be trained in jungle warfare.  By January of 1944 these men became known as Merrill’s Marauders, the jungle fighters of World War II, named after their leader, General Frank Merrill.  Officially, they were the 5307th Composite Unit (Provisional).  Their code name was Galahad.  This group was a United States Army long range penetration special operations jungle warfare unit which fought in the China-Burma-India Theatre (CBI) of World War II.  They were the only ground combat unit in the area.

While I knew Dad was a Marauder and had spent time in Burma, I didn’t really know or understand the magnitude of the unit.  When my son-in-law told me that this group was really important and quite significant, and he was obviously in awe, I knew I needed to look beyond the few items in Dad’s box of memorabilia.

Who were these volunteers, the who men who jumped at the chance to fight?  They were men who thought the war was passing them by.  Some were men who had lost their way and felt answering this call would be their answer.  They were a cross-section of society representing the country’s diversity.  They were farmers, teachers, lost souls and college playboys who quickly became a cohesive unit.  They were the men who marched through the jungle and over mountain trails for over 1,000 miles carrying all food and equipment on their backs.  They were Merrill’s Marauders.

Among the items Dad kept was the newspaper clipping of the photo below.  It has been called the Melting Pot photo.  It shows the rich ethnic diversity of the unit.  Dad is in the top row, third from the left. 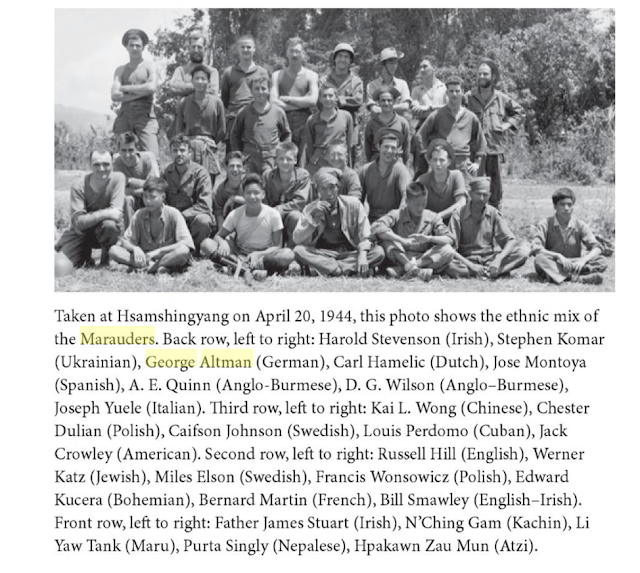 Heroism, sacrifices, and military accomplishments define this unit of three battalions, three separate combat teams, who entered combat on 24 Feb 1944 from their training base in Ledo, India.  At the age of twenty, Dick was cutting his way through the jungle, far behind enemy lines, on his first mission, to cut off the Japanese Division’s main supply route, the Kamaing Road.

Every day was one of pushing through the dense jungle enduring sweltering heat, heavy monsoonal rain, wading in ankle-deep mud, and taking breaks to pick off leeches from each other as well as the mules that were carrying supplies.   Many nights were spent in a foxhole, on alert, fearful that the Japanese would discover them.

Additionally, the jungle took its toll.  It was the perfect fever-den, teaming with disease.  Fever, malaria and dysentery, were not the only diseases lying in wait.  The men had to be mindful of leopards, tigers, elephants, huge pythons and the terrifying king cobra.  Facing multiple challenges was commonplace for the Marauders.

These constant conditions resulted in fatigue, exhaustion and low spirits.  Regardless, the Marauders pushed forward becoming well known for their deep penetration behind Japanese lines, often engaging forces superior in number.   These were the soldiers who were considered expendable. There was a plan to get them into Burma but no plan to get them out. These were the men who survived the conditions by putting their head down and taking one more step.  They never gave up. 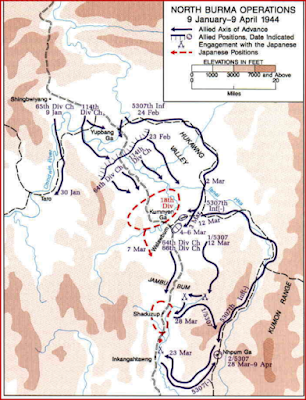 They hacked their way through nearly 1,000 miles of jungle behind enemy lines.  Many days the men had meager and poor rations, and sometimes just one cup of water a day.  Yet, they pushed forward onto the next mission, the next engagement, working their way toward the ultimate goal, recapturing the airstrip at Myitkyina, Burma which was of great tactical importance in the campaign.

It took three months of fighting their way down the Hukwang Valley before they captured the airfield at Myitkyina, Burma, in conjunction with Stilwell’s Chinese troops.  During that time they had fought in five major and 30 minor engagements against veteran Japanese troops.  Their ranks were decimated more by disease than by combat casualties.  Of the almost 3,000 who left Ledo only 1,310 reached the airstrip on 17 May 1944. By June, less than 650 remained. 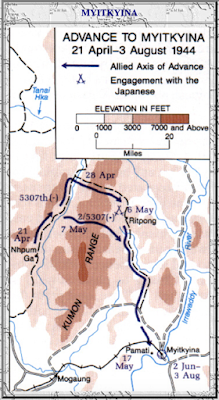 The Marauders who walked into Myitkyina were not well men.  They had been pushed beyond human endurance.  The Medics ordered them out.  They were medical casualties who needed rest and medical attention.  George was one of those men.  After he was treated for malaria and had time to recover, he reported back to his unit.  Dad remained in Burma another year and a quarter. 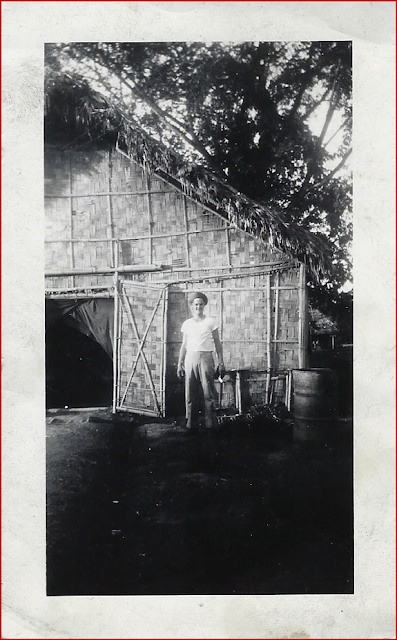 A week after taking Myitkyina, the 5307th Composite Unit (Provisional) was deactivated. It was then reconstituted as the 475th Infantry Regiment.  The few able Marauders from Galahad, reinforcement soldiers, known as New Galahad, and the 12th Cavalry Regiment became part of a new unit. It was called the Mars Force.  In the spring of 1945 in cooperation with the Chinese, the Mars Force marched down the Burma Road.  George was one of these soldiers.

When asked about his time in Burma, his response was that he didn’t want to talk about it.  He only shared tidbits about his time there. Those tidbits were shared while he was sorting through his little box of pictures and memorabilia.  He showed pictures of his visit to the Taj Mahal in Agra, India.  He mentioned that he helped to train the Chinese soldiers.  At one point he described an encounter with a Japanese soldier who jumped out at him while he was on a trail.  He said he had no choice but to use his bayonet.  It is understandable that he preferred not to relive the horrors that he must have seen and endured.

Dick was sent back to the states in August 1945 departing by ship from Calcutta.  He separated from the Army of the United States on 6 November 1945 at Fort Leonard Wood, MO.

I am happy that my son-in-law prompted me to really learn about my dad’s experience as a Marauder.  It gave me a better understanding of the man, what he endured and why the Marauders were such a significant group of men.  Today, the 75th Ranger Regiment honors the legacy of Merrill’s Marauders by wearing the Marauder patch as their crest.

There were times growing up when Dad found it necessary to share a few words with me.  He always seemed to end with a phrase that was shared with him as he grew up.  “You do what you have to do and you don’t complain about it.”  That was his way.  He was tough.  He put his head down and pushed through every challenge.