It Is All About Location #52 Ancestors

For years I didn't really give my ancestor's location much thought.  I noticed that my maternal second great grandfather was living in a new location for each census.  How many people move around that much?  One time I got curious and found a township and county map so that I could trace where he and his family were each decade.  It looked as though he moved around in a circle. After that, I didn't consider maps and locations of much importance.  I didn't think about how the area during that time was changing or how the boundaries may have affected their lives.  I didn't think about what history might tell me about the time period and how that affected their lives.  I didn't think about the fact that the ancestors being researched were on the frontier.  I definitely didn't think about what that really meant for my ancestors.  I had a lot to learn.

What does the actual study of location entail?  I started by finding a map of the area for the span of years I was researching.  While studying the map, I asked questions that would help me learn about the history of the area.

Once I embraced the study of location my research became more targeted, more organized, more efficient, more meaningful, and I was more successful.

Most recently, I was studying my maternal third great grandmother, Catherine Hoak Noel.  She was born in 1798 in Strasberg, Lancaster County, Pennsylvania.  The bits and pieces of sourced data that I had placed her in Lancaster, Cambria and Allegheny Counties.  This led me to begin studying the history of Strasberg for the timeframe I was researching.  While this map is of the area in the early 1900s and not the time I was researching, it does provide a visual which matches the description of the town, "a linear city stretching for two miles along the Great Conestoga Road."  There are far more homes depicted than the dozen homes in the early 1800s! The road was a primary route that connected Philadelphia and Lancaster. T. M. Fowler 1903 of Morristown, PA (drawn and published by), Public domain, via Wikimedia Commons
The question on my mind was how did they make their way to Western Pennsylvania.  Settlers used the Indian trails.  Those trails were widening to accommodate horses and wagons, as pioneers made their way west.  At the same time there were military roads that had been constructed and were also being used by the pioneers.
Catherine and her family moved west to Cambria County, which was formed in 1804.  The first area settled was Loretto.  The area was slow to develop with only 28 families in the original settlement.  It wasn't until the 1830s that the area began to grow quickly with coal mining and iron works as industries, and the arrival of the railroad. 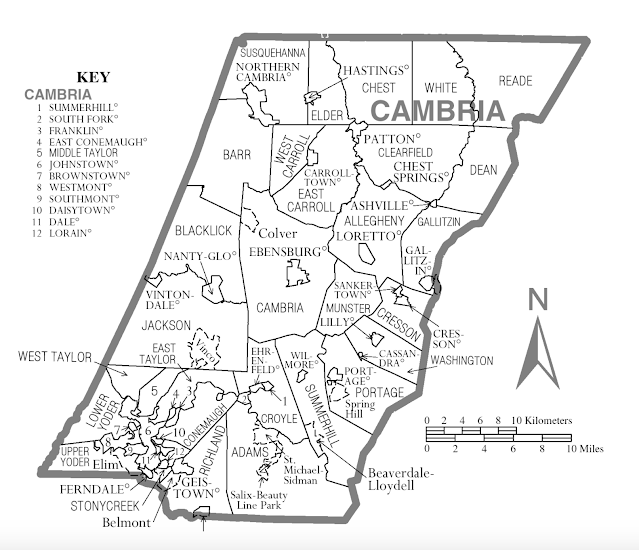 (c)2006 Derek Ramsey (Ram-Man) (from U.S. Census Bureau source), CC BY-SA 2.5 <https://creativecommons.org/licenses/by-sa/2.5>, via Wikimedia Commons
Exactly when Catherine and her parents made the journey west, is still a mystery.  When were they in Cambria County?  How long did they stay?  When and where did she get married?  Census records place her and husband, Peter Noel, in Clearfield, Cambria County in 1830.  Catherine's parents, Jacob and Hannah Pugh Hoak are in Allegheny County in 1830.  There is a twenty year gap without a record.
Examining maps, asking questions and then studying the history and development of the area guides the research.  It is a focused, organized, and efficient approach to tracking down ancestors!  I am a believer in studying location and developing a Locality Guide to help me quickly find the resources I need.  Of course, there is more to the study of location and the development of a guide, but maps are one of the categories and the beginning of each of my research projects.  I really can't research effectively without first studying maps and then developing a Locality Guide,  it is time well spent.

Studying location changed my approach to research and the level of success that I was having.  I was introduced to the concept and guided through the development of a Locality Guide by the Family Locket Team, Diane Elder and her daughter, Nicole Dyer.