Twists, Turns, Mysteries and Adventure - The Waldhauer/Walthour Family - Across the Atlantic Without a Captain - Part 4 #52 Ancestors

April 18, 2020
Can you imagine boarding a sailing ship to go from London to the Georgia Colony and finding yourself in the middle of the ocean without a captain to sail the ship?  That is exactly what happened to the Johann Caspar Waldhauer family when they determined to continue the journey they had begun a year earlier.

The family had had quite an adventure since leaving their German homeland.  At their own expense, they sailed down the Rhine River headed to Amsterdam, dealt with numerous toll stops, had their belongings frequently rifled by customs agents, found themselves onboard the ship, Two Sisters, headed for Philadelphia, were taken captive by Spanish Privateers, became prisoners of war, lost all of their belongings, were placed in prison in Bilbao, Spain, ransomed by the English and returned to London!  It is no wonder that they felt the British owed them a passage to the colony. They never landed where they were headed!  It surely wasn't their fault that King George's War caused their ship, Two Sisters, to be captured.

It is a wonder that they persevered.

In May 1745, a group of about 173 Protestants, through their spokespersons petitioned the Trustees to take them to Georgia.  The Trustees had great concern for the welfare of the emigrants.  It was determined that funding the passage for the Germans and providing them with the supplies that they needed would be an expensive venture.  In the Georgia Colonial Records it is stated that it was determined by the Trustees that to send a large number of "Foreign Protestants" to the colony would be a "National Service" by an "Addition of Strength to the Colony."

The Lords Justice conveyed to the Trustees that their stores were very low.  They would provide transport for the "poor" Germans, but as servants.  Clothing, bedding, arms, ammunition, working tools, and "necessaries for their use" would be provided.  In return they would need to contract as servants for a four year term.  They would be indentured to the Salzburger families who had emigrated from Austria to settle in the Georgia Colony.

In addition, each male twenty-one and older would receive fifty acres of land.  They would be permitted to work their land one day out of every six.  If they were self sufficient in three years, the last year's service would be remitted.

Seventy three out of the group of one hundred agreed to the terms.

The emigrants had been living in a storehouse since their return from Spain.  It was squalid living conditions.  With no funds or job,  they were supported by the charity of the townspeople.  Many were sick.  There was ongoing suffering from symptoms of dysentery,  high fever, nausea, and headache, to name a few. 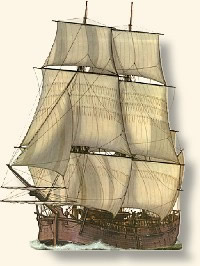 Since the fever seemed to appear in groups of Germans during their passage to and arrival at their destination, it became known as the Palatine fever.  There was no understanding of the disease nor how to treat it. (Palatine fever is a type of typhus that can be fatal within 9 to 18 days, if untreated.  It is a disease transmitted to man from body lice. Mortality may approach up to 60 percent.)

Despite disinfecting the decks of their transport with liberal quantities of vinegar, the Palatine fever was carried onboard their transport, the Judith.

In late summer 1745, Captain Walter Quarme set sail, on the eleven-week journey, to the Georgia Colony.   Well into the journey, a burning fever inflicted Capt. Quarme, crew, and passengers.  The Captain died and the first mate was dreadfully ill.  There wasn't any other crew member who could sail the ship.

The ship might never have made across the Atlantic to Frederica, Georgia had Bartholomäus Zouberbühler, a Swiss passenger, not known enough geometry to plot the ship's course with help from an illiterate sailor.  On 22 January 1746, the Judith made it to the Georgia Colony coast and landed at  Fort Frederica.  Had Bartholomäus steered but a few degrees south the ship would have been in Spanish occupied Florida!

Serving an indenture regardless of the plot of land, did not sit well with Christoph Conrad Waldhauer and George Jacob Waldhauer.  The Virginia Colonial Records have an entry that serves as evidence of their leaving the Georgia Colony in 1746, that would be sometime within the year of their arrival in Ebenezer. 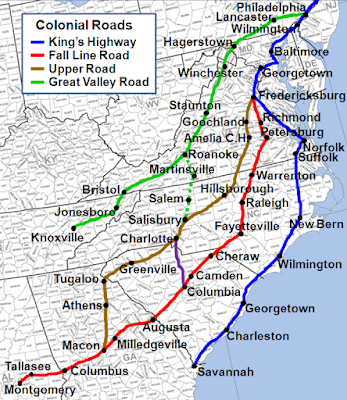 The two brothers were headed to Pennsylvania.  They had to have been brave men to head out through the wilderness.  Not knowing if they were being pursued would have warranted caution.  They were headed to Lancaster and most likely paralleled The Fall Line Road or the Great Valley Road.  It was about 735 mile to Lancaster, Pennsylvania.

The men landed in Lancaster, Pennsylvania living there for at least ten years before migrating to Westmoreland County, PA. 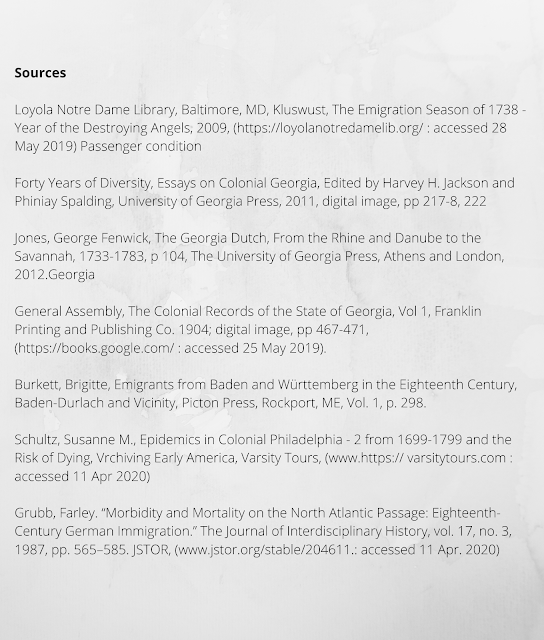 April 09, 2020
It was twenty years ago when I took a close look at our Waldhauer (Walthour) line. At the time, I had no idea that this section of the family tree was going to be a mystery filled with so many twists and turns, as well as the hint of adventure.  Trying to unravel the twists in the tree to make some sense was crazy...  The same Waldhauer/Walthour line connects into the tree twice!  It connects through our great grandmother, Elizabeth Rachel Kunkle.   Elizabeth's father was Samuel Kunkle (gg grandfather) and his mother was Anna Maria Catherina Walthour (ggg grandmother.)  She was the daughter of George Jacob Walthour (gggg grandfather) who was part of the family who emigrated from Germany and the focus of the story. The Waldhauer/Walthour family connects again through our great grandmother, Elizabeth Rachel Kunkle.  Elizabeth's mother was Mary Ann Krock (Alexander) Kunkle our gg grandmother.  Her mother was Mary Elizabeth Walthour (Krock, Bair) our ggg grandmothe
Post a Comment
Read more