March 04, 2020
It was late December 1887, and a typical winter day for Joseph B. Shaner and family in Cowansburg, Pennsylvania.  The snow was banked against the house and streets were slick with patches of ice. The holidays were behind them and the family had settled into their usual routine.  Rebecca got up early to make lunches as family members readied themselves to brave the cold outdoors to make their way to work or school. Joseph headed to the Coal Mine near Lash Post Office.

Rebecca’s day had started like any other.  She did some laundry, cleaned the house, baked some bread and prepared a pot of beans for dinner.  Later that day she heard a shuffling at the door. Joseph was on a stretcher! Fellow miners carried him indoors. The men quickly explained that he had been injured in the mine.  Dr. J. D. Milligan attended Joseph that same day, December 29, 1887, stating that Joseph had been crushed by a piece of slate that had fallen on him.

The family stayed with Joseph night and day trying to keep him comfortable but there wasn’t any hope..  Joseph B. Shaner died January 4, 1888. He was buried at Union Cemetery in Irwin, Westmoreland, PA. (Section 37, Lot 37)

Who is Joseph B. Shaner?  Second great grandfather, Joseph B. Shaner, is one of seven sons born to William Wilhelm Shaner and wife, Sarah “Polly”.  Six sons lived to adulthood and all six served during the Civil War. William and Sarah were also blessed with a daughter.

During Joseph’s service he was assigned to Washington DC where he participated in Northern defense of Washington DC and along the Manasses Gap Railroad protecting supplies for Sheridan.  He saw action in numerous battles. Prior to mustering out he was assigned duty on Bull Run battlefield where he helped to bury 2,000 fallen soldiers.

When he returned home, at nineteen, he headed to the mines in search of work.  Since he was living at home, he helped his family by contributing a portion of his wages for rent and food.

In the 1870 United States Federal Census Population Schedule for Sewickley, Westmoreland County, Pennsylvania, Joseph had moved from his parent’s home and is listed with his brother Vese and sister-in-law, Ann (Curry).  Also in the household is Ann’s sister Jennie (Rebecca Jane) Curry and her one and a half year old daughter, Lizzie Curry.

It wasn’t until 15 June 1871 that Joseph and Rebecca got married.  By that time, they had a second child on the way. Mary Loretta Shaner was born 15 November 1871. 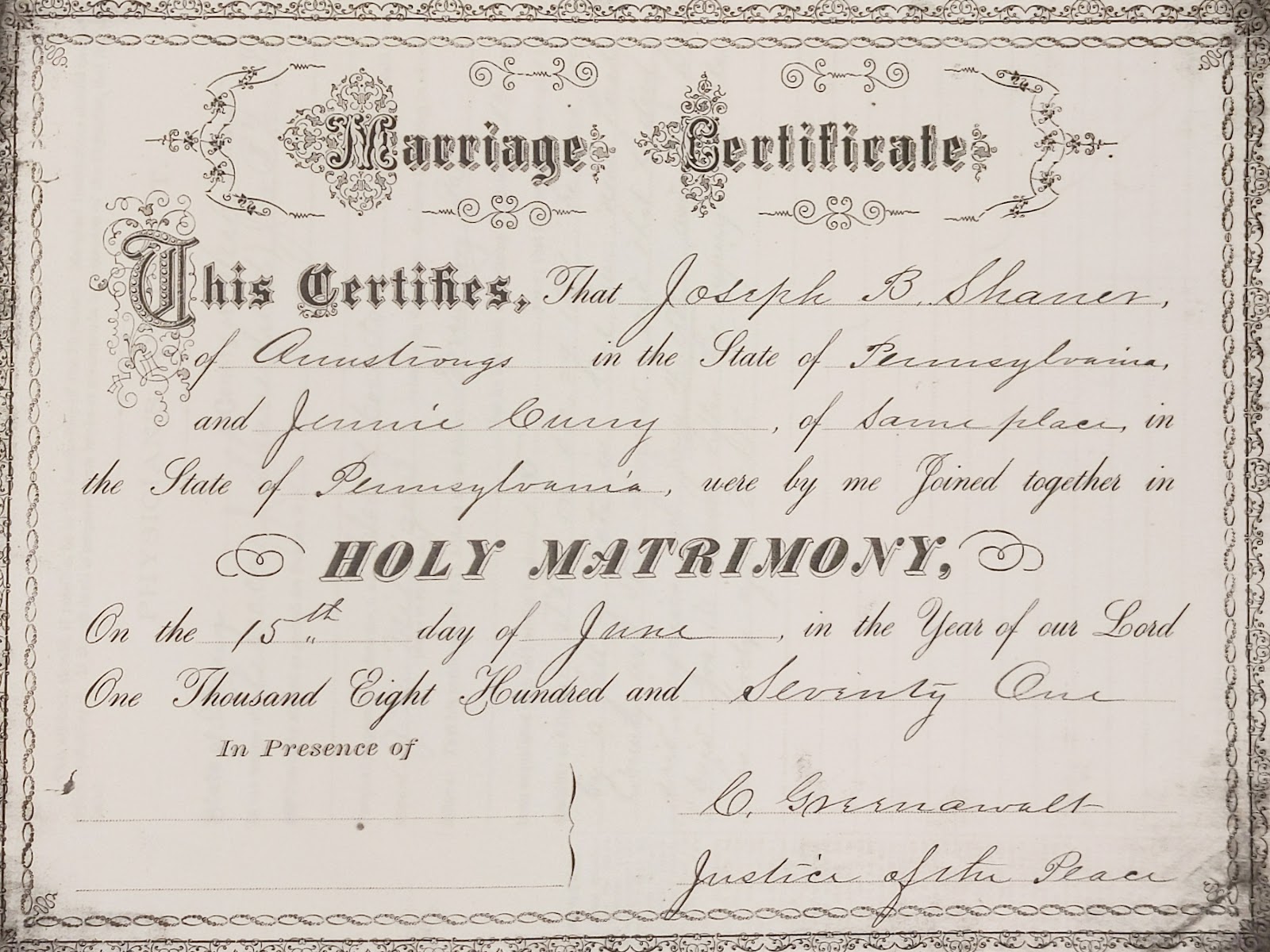 At the age of 37, Rebecca was a widow with two children at home under the age of sixteen, Frances Orleana (1873-1959) and Harry Alfred (1885-1942).  Times were very difficult and Rebecca struggled to find a way to support herself and the two children still living at home. She began taking in laundry to earn a few pennies each week but it wasn’t enough.  On 21 March 1889 Rebecca filed for a Civil War Widow’s Pension.

In 1890,  Rebecca was approved to receive $8 per month plus $2 for Harry who was under sixteen.  Each time legislation changed and pension increases were available, Rebecca applied.

She owned a little house at 711 Bullitt Avenue in Jeanette, Westmoreland, PA valued at $6,000.  Her pension was her only income. On 18 April 1929, she was granted a final increase to $50 per month.  Sadly, she would never see the benefit of the approved increase to the pension. Rebecca passed away on 22 April 1929. 711 Bullitt Ave., Jeanette, Westmoreland, PA is the home in the center.  It has a for sale sign in the yard.