March 21, 2020
Wanting to be independent but feeling trapped, third great grandmother, Mary Elizabeth Waldhauer (1796-1862) was resolved to find a husband. She had a good mind. She could read. She could write. She was also pretty but she didn’t have choices. Finding a husband was what was expected. It was 1815 and a woman’s role continued to be limited to finding a husband, having children, taking care of the children and submitting to their husband for their entire life. Elizabeth had a different expectation of what her life should be. She wanted to be on her own and have financial independence. She did not wish to have to marry to be economically safe and protected. Yet, it was unthinkable for a woman to remain single. Society scorned and pitied single women. She had no choice. She had to find a husband.

John Krack/Crock, (1771-1824) was a farmer and a widower. It is most likely that John’s wife passed away soon after the birth of their daughter in 1814, as deadly infections following the birth of a child were common for women in the early 1800’s. The infections were known as “child bed fever.” In 1815 John was a single father with six children ranging from infancy to the age of eleven. Working the 95-acre farm and also taking care of six children was impossible. He was 44 years old and he needed a wife.

John soon found a wife and Elizabeth soon found a husband. Sometime between 1815 and 1820 Elizabeth Waldhauer married John Krack/Crock. John was 25 years older than Elizabeth, who was 19. Marrying a widower with a family gave Elizabeth the financial security she sought and John had a young helpmate. The John Crock household was enumerated in the 1820 census for Hempfield, Westmoreland, PA.

Note:  The early censuses did not list the names of each individual in the household nor was there a form.  The enumerator collected information about the number of residents within a designated age span.  The number of individuals within the span is recorded.

On the first of March in 1824, John Krock, age 53, passed away. Elizabeth, at the age of 28, was a widow.
John died intestate meaning he did not have a will. This left his children and widow, Elizabeth, as heirs. The Crock children now ranged in age from ten to twenty. Thomas, as the eldest male, would be the heir of law and would be responsible for assuring his siblings and step mother received their share of the inheritance.

As time went by, Elizabeth knew that, when all of the children became of age, change would be inevitable. She needed to move out on her own or find another husband and that would mean meeting somebody.

Elizabeth attended church regularly hoping that she would meet someone and she always enjoyed the Walthour family get togethers. She met her cousin, Christian’s good friend, Samuel Alexander. Samuel was handsome, kind, and friendly. They seemed to get along well. In early spring 1826, Elizabeth realized she was with child but she and Samuel did not get married.

Mid October Anna Maria Krock/Crock known as Mary Ann was born. In the new year, Mary Ann’s parents, Elizabeth Walthour Crock and Samuel Alexander, had their illegitimate daughter baptized at the Brush Creek Salem Lutheran Church, Hempfield, Westmoreland, PA. The Brush Creek Lutheran Church congregation were staunch defenders of the use of the German language in worship so it is most likely that the service was conducted in German.

Elizabeth returned to the home of her father, Jacob Waldhauer/Walthour, sometime before 1830. It seems likely that once Elizabeth was noticeably pregnant, or maybe after Mary Ann was born, she would not necessarily have been welcome on the Crock farm. Deviating from the social norm found Elizabeth facing condemnation from the Crock family and the community. Returning to her father’s home was the only place that she could go. Elizabeth and Mary Ann are enumerated in the 1830 census in the home of her father, Jacob Waldhauer/Walthour.

In 1836, twelve years after the death of John Krock, Thomas Krock, the eldest son, submitted a petition in Orphan’s Court to purchase the property. It was agreed that he may remain on the land if Elizabeth, the widow, received 1/3 part of the interest, $689.39, for the remainder of her life. Elizabeth’s yearly share was to be $279.27. Elizabeth now had some income. 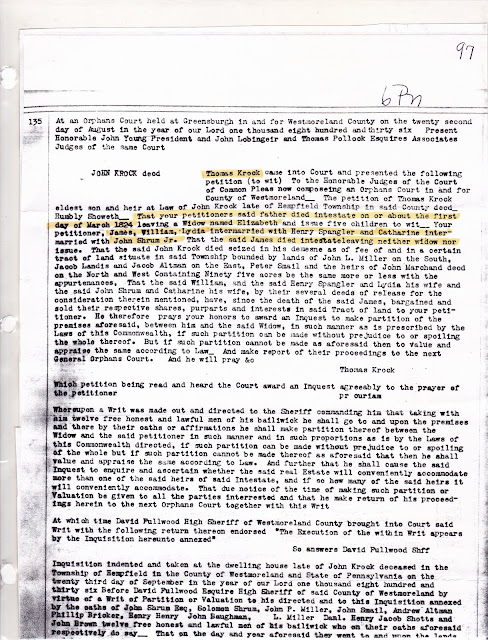 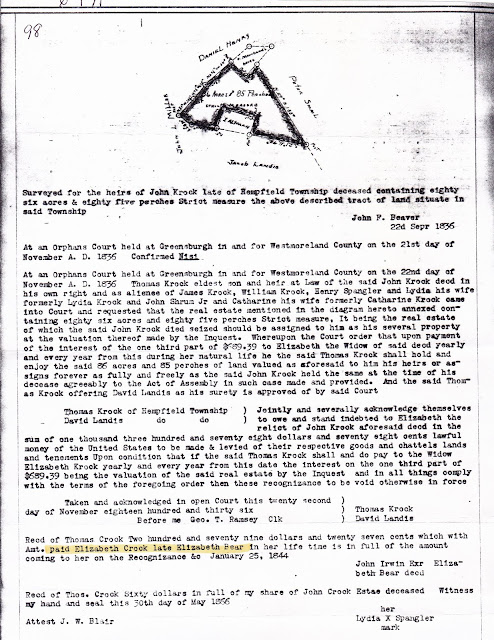 Jacob Waldhaluer/Walthour died in 1839. Elizabeth was listed among the heirs in Jacob’s will, she is recorded as a widow. By 1840, Elizabeth age 43 and Mary Ann age 13, were living in their own home, as enumerated in the 1840 census for North Huntingdon Township, Westmoreland, Pennsylvania.

In March, 1848, Elizabeth’s mother, Barbara Knappenberger Waldhauer/Walthour, wrote her will. In the will she states, “ …Item first, I will and bequeath to my grand daughter Mary Ann Krock or Alexander (an illegitimate child) & daughter of Elizabeth Krock now intermarried to Jacob Bear the sum of one hundred dollars…”

The statement in the will reaffirms that Mary Ann was illegitimate and that Samuel Alexander was her father. On 12 September 1854, Barbara passed. 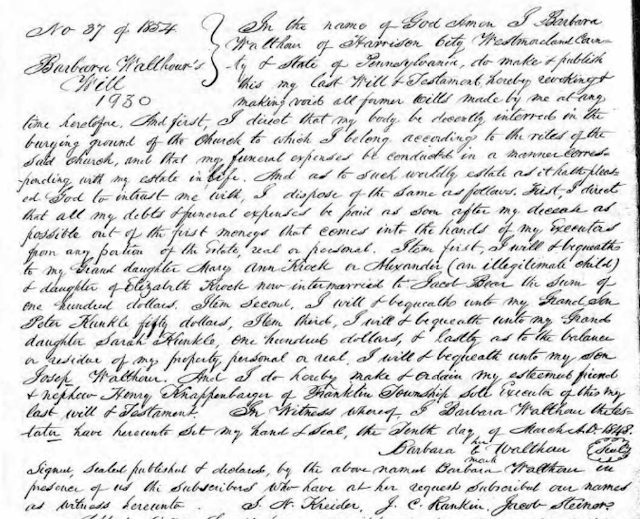 Revolutionary War soldier, Jacob Bear/Bair (1756-aft 1848), was last enumerated in the Westmoreland County, Pennsylvania 1840 census where he is listed as 84 years old and a former soldier. In Barbara Knappenberger Walthour’s 1848 will, Jacob is listed as intermarried with Elizabeth. At the writing of the will, Jacob was 92 and Elizabeth was 52. Why would Elizabeth marry a man who was forty years older? Jacob must have had property and offered Elizabeth the security and independence that she sought all of her life.

Jacob Bair passed after the August 1848 last will and testament written by Barbara Knappenberger Walthour and before the 1850 census enumeration. The 1850 census listed the household of Mary Bare (age 53) and Mary A. Crock (age 23). They were living in North Huntingdon Township, Westmoreland County, Pennsylvania. Mary had real estate valued at $400. 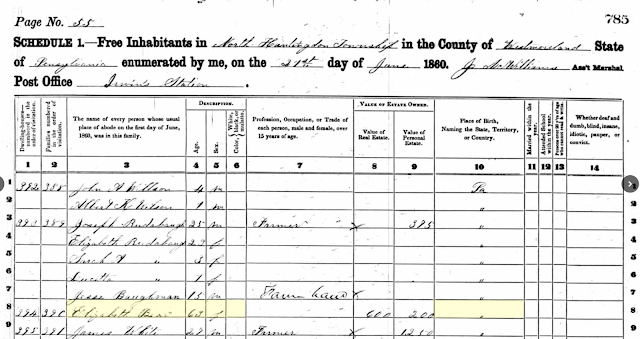 1860 United States Federal Census Pennsylvania, Westmoreland County, PA, (North Huntingdon Township, Westmoreland County, Pennsylvania), Population Schedule, p 785, Dwelling 394; Family 390; Elizabeth Bare; (http://ancestry.com : digital image; accessed April 2013), Provo, UT Roll: M653_1196; citing Family History Library Film 805196
It must have been confusing to grow up not knowing for certain which last name was your mother’s and which one was yours. It was undoubtedly confusing for friends and family members as well, or perchance they didn’t have any idea about the mystery surrounding Mary Ann of many names. But then, just maybe, she didn’t really know either. 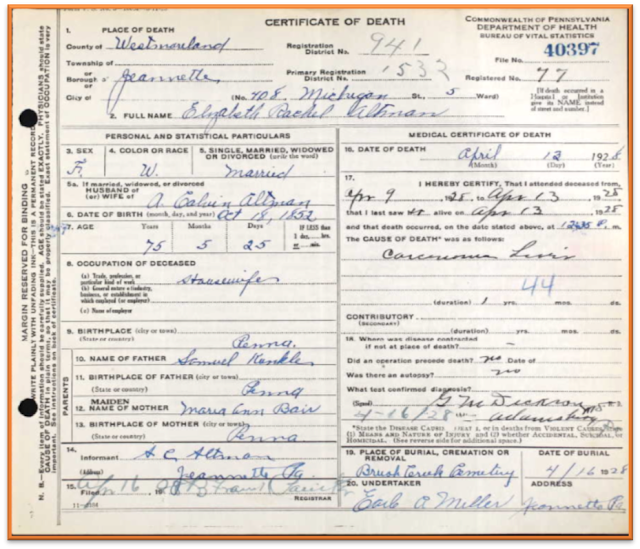 Mary Ann’s son, Stephen Kunkle, was the informant at the time of his mother’s death. He reported Mary Ann’s father as John Crock and her mother’s maiden name as Elizabeth Walthour. Mary Ann must have known that she was not be the daughter of John Krock, as her grandmother made it very clear in her will that she was illegitimate and the daughter of a man whose surname was Alexander. Elizabeth Walthour Krock Bair lived the stigma of having had a child out of wedlock. As the child of Elizabeth, Mary Ann certainly had to have been affected, also. 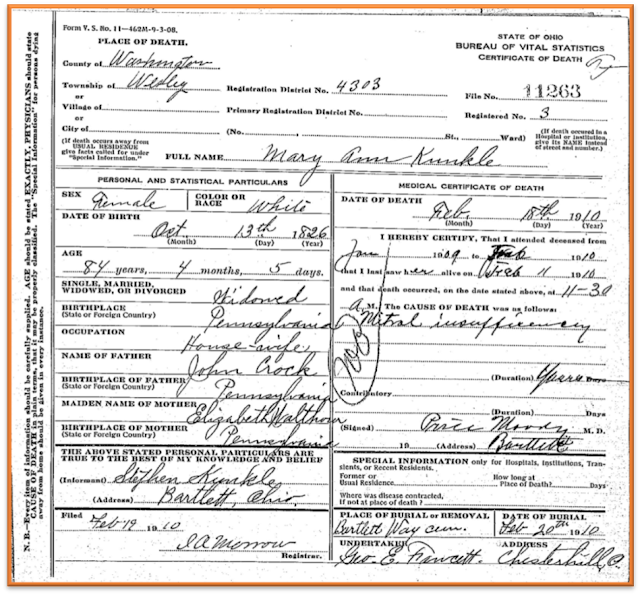 In her last will and testament submitted 23 October 1862, she: 1) requested to be buried in the new grave yard near Adamsburg, 2) left $500 to Mary Ann wife of Samuel Kunkle and 3) to Elizabeth Rachel Kunkle she bequeathed her new bureau and yellow bed stand with all of the beding. 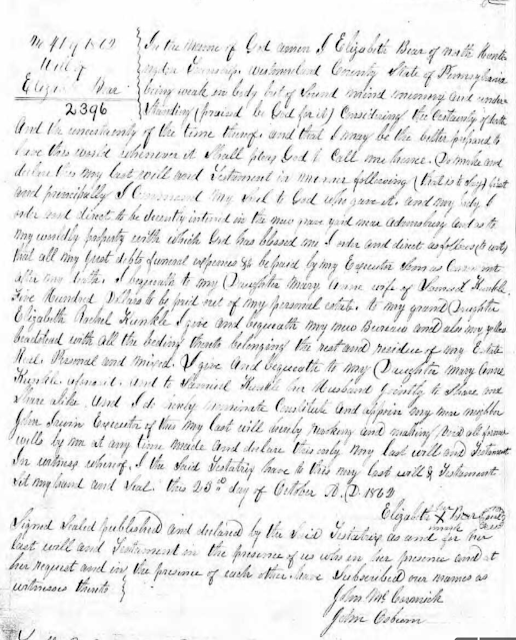 Family wills held the answers to the questions about Elizabeth and daughter, Mary Ann, and the mystery of their many names. Mary Ann was not John Crock's daughter as stated on her death certificate. She was the daughter of Samuel Alexander, a friend of the family. Crock was her legal last name as her mother was Elizabeth Crock, a widow, at the time of Mary Ann's birth. As for Baer being her last name as Adam Calvin reported, he knew her mother's last name was Baer when he met Elizabeth. It is possible that that is all he knew about Elizabeth's mother.

April 19, 2020
We come from a long line of coal miners in Pennsylvania.

Coal mining began in the Pennsylvania colony about 1760 at a place called Coal Hill, across the Monongahela River from Pittsburgh.  Coal was extracted and then moved by canoe down the river to Fort Pitt.  From these beginnings coal became a big industry through the centuries.

Coal mining boomed in the Industrial Revolution of the 19th and 20th centuries.  It was used to power steam engines, generate electricity and heat buildings.  Many of the men in our family mined coal from their arrival in Pennsylvania in the 1700s through about 2014 when cousin, Butch,  retired as the last Altman coal miner.

We come from a long line of coal miners in Pennsylvania.

As a very small child, I remember my dad, George Dickson Altman, coming home with a white hard hat that had a light on it and his face was covered in black grime.  I remember his dusty boots and beat-up lunchbox.  He worked for John Carr Mine at Edna #1.

April 09, 2020
It was twenty years ago when I took a close look at our Waldhauer (Walthour) line. At the time, I had no idea that this section of the family tree was going to be a mystery filled with so many twists and turns, as well as the hint of adventure.


Trying to unravel the twists in the tree to make some sense was crazy...  The same Waldhauer/Walthour line connects into the tree twice!  It connects through our great grandmother, Elizabeth Rachel Kunkle.
Elizabeth's father was Samuel Kunkle (gg grandfather) and his mother was Anna Maria Catherina Walthour (ggg grandmother.)  She was the daughter of George Jacob Walthour (gggg grandfather) who was part of the family who emigrated from Germany and the focus of the story.
The Waldhauer/Walthour family connects again through our great grandmother, Elizabeth Rachel Kunkle.  Elizabeth's mother was Mary Ann Krock (Alexander) Kunkle our gg grandmother.  Her mother was Mary Elizabeth Walthour (Krock, Bair) our ggg grandmother.  Her father was…
Post a Comment
Read more

Twists, Turns, Mysteries and Adventure - The Waldhauer/Walthour Family - Down the Rhine and Pirates, Part 3 #52 Ancestors

April 11, 2020
Johann Caspar Waldhauer had lived in the same area of Germany all of his life.  He was the innkeeper at the Sign of the Grapes in Brötzingen, Germany and had land for farming.  His father, Hans, had been a juror in the same town.  His family and friends were nearby.  He prospered for himself and for his landlord, Margrave of Baden-Durlach, Charles Frederick.

But times were getting tough.  The yearly tax of 30% of his income was affecting his ability to provide for his growing family. The French and Imperial Army troops were marching through the area frequently leaving the inn in disarray and the land unfit for planting.  Any land that had been planted had been affected by the severe winters and particularly wet summers that destroyed the crops, livestock, and seed.  Johann Caspar could see poverty lurking in the future and knew that he had to do something.
His friends and fellow villagers stopped by the inn and were talking about the New World.  They heard that the immigrants were treat…
2 comments
Read more