Twists, Turns, Mysteries and Adventure - The Waldhauer/Walthour Family - Down the Rhine and Pirates, Part 3 #52 Ancestors

April 11, 2020
Johann Caspar Waldhauer had lived in the same area of Germany all of his life.  He was the innkeeper at the Sign of the Grapes in Brötzingen, Germany and had land for farming.  His father, Hans, had been a juror in the same town.  His family and friends were nearby.  He prospered for himself and for his landlord, Margrave of Baden-Durlach, Charles Frederick.

But times were getting tough.  The yearly tax of 30% of his income was affecting his ability to provide for his growing family. The French and Imperial Army troops were marching through the area frequently leaving the inn in disarray and the land unfit for planting.  Any land that had been planted had been affected by the severe winters and particularly wet summers that destroyed the crops, livestock, and seed.  Johann Caspar could see poverty lurking in the future and knew that he had to do something.

His friends and fellow villagers stopped by the inn and were talking about the New World.  They heard that the immigrants were treated well and there was an abundance of land for farms.  One villager shared a letter he had received.  It mentioned vast unpopulated land available free or for minimal cost, high wages, minimal taxes and how bountiful the land.  Excitement hummed through the inn's tavern.  There was talk of leaving.  They could go as a group, help one another, and thrive in the New World!

Johann Caspar was determined to have a better life for himself and his family.  He was willing to take the risk to have a new beginning.  Emigrating with his friends and fellow villagers seemed to be the answer.  To do that, he had to apply for permission to be released from his landlord, Charles Frederick, Margrave of Baden-Durlach.  He was bound by his feudal obligations and required manumission.

After applying, the Amtmänn, the government official in legal and financial matters, would visit his inn and property to estimate the value of his estate.  The Waldhauer estate was valued at 1500 fl.  His debts were settled and a 10% fee, 150 fl, was charged.   Johann Caspar was warned of the dangers he may face before his request was granted. He was determined to leave and paid the fee on 28 January 1744 and received his certificate of manumission from serfdom. He was free to leave the village.

On a cold winter day in January 1744, Johann Caspar and wife, Anna Margaretha, gathered their seven children for the trip.  The three oldest boys, Christoph Conrad age 23 and George Jacob age 21, and Jacob Caspar age 14 would be a great help to Johann Caspar.  The older girls, Esther Elisabetha age 19 and Margaretha Barbara age 16 would help Anna Margaretha prepare food and keep their clothing clean and mended as well as tend the youngest children, Friederica Magdalena age 12 and Gerg Michel age 10.  They were financially secure and were able to pay their way.

The group packed a few of the family's belongings into a two wooden trunks.  Johann and the older boys had sewn a little extra money into the hem of their coat.  He tucked the family prayer book with a wooden cover into his pocket.  The family provisions, dried beef and pork, bread, cheese and grains were packed into sacks.  They said their farewells to friends who were staying behind.  The friends wished them well and gave Johann Caspar some letters and a few small packages to carry to friends and family who had gone before and were established.

They made their way to the river boat and boarded with their friends and other villagers who were headed to Pennsylvania.  It was very crowded on the boat.  Fortunately, each family did have a small space below deck and trunks were stowed below.  Johann Caspar had heard of the customs officers and toll stations along the river.  He carefully carried the few family valuables on his person. 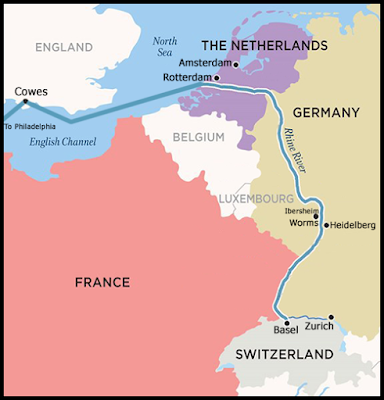 The first part of the trip is not dangerous.  The boat must stop at the border of each principality and the custom's inspector must clear the vessel before it can continue, almost always after a toll or fee is paid.  The trip down the Rhine, (Karlsruhe to Rotterdam) is a journey of about 400 miles.  The trip to Rotterdam under good conditions can take up to 4-5 days without stops. The many toll stations along the way where they were stopped to pay fees and the boat was searched by customs officials, delayed the trip.  At each stop the travelers were encouraged, sometimes coerced, to spend money at the castle merchants. 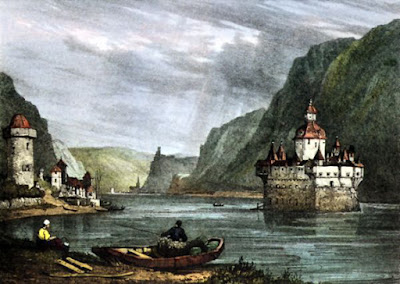 
They boarded the ship, Two Sisters, and prepared for the long six week trip.  Each of the adults was allotted a sleeping space 6 feet by 2 feet and half of that space for a child over five.  Once they were settled, they gathered on deck to hear the rules.
On a cold morning in February 1744, Two Sisters left Rotterdam sailing for Philadelphia, Pennsylvania.  Captain Stedman was barely off the coast of England when the first mate saw two vessels under full sail bearing down on them.  Suspecting privateers the Captain  pushed full sail but the vessels were gaining so rapidly that the they were soon a mile astern.  The privateers fired a shot and hoisted the English colors. Captain Stedman lowered the flag as a token of submission.

When the vessels came upon the Two Sisters, they hauled down the English flag and hoisted the Spanish flag.  Captain Stedman was then ordered onboard with the boat's crew.  A prize crew, the selected members of the privateer chosen to take over the operations of the Two Sisters, were then sent aboard.  There were about nineteen seaman armed with pistols and cutlasses.  When they were aboard they stripped the passengers of their clothes and gave them the rags on their backs in exchange.  The  prize officer was ordered to sail the Two Sisters into Bilbao, Spain and the two privateers sailed away.

The new captain was very nice at first. Passengers were treated well as long as they remained in the designated area.  Early in the morning, a few days later, the Captain approached and demanded the keys to the trunks, all money and all watches.  Passengers were only permitted to take the clothing they were wearing when it was time to leave the ship.  That afternoon the ship landed in Bilbao, Spain and passengers were ushered into a prison where they were confined.  Meeting with the Dominicans, however, was a daily occurrence. The Monks met with the group to instruct and encourage conversion to the True Faith.

A year later, the English sent a cartel ship, the Drake, to carry the prisoners of war home to England.  The group had been ransomed by the British and on 31 March 1745 sailed into Gosport (near Portsmouth), England. 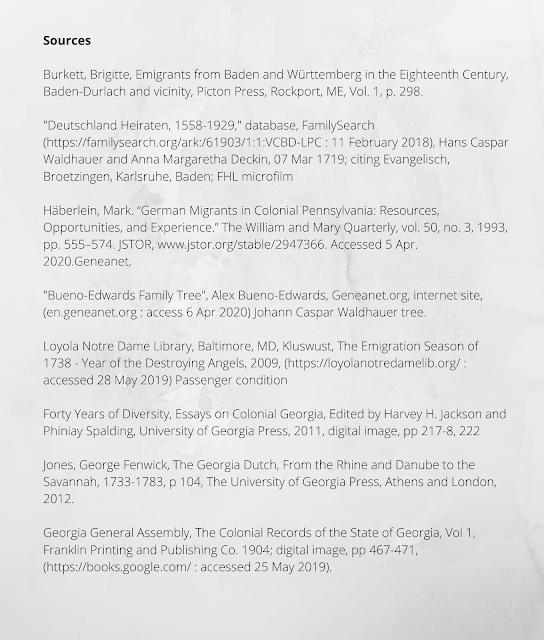