January 08, 2021
Thinking about my family and beginnings, I realized that many of their beginnings, over the last three hundred years, were high risk. Their beginnings involved long journeys over land, travel down rivers, and ocean voyages, meeting any number of challenges along the way. They persevered. They sailed the ocean toward the horizon, toward the unknown, toward what they hoped would be opportunity and a new beginning for their family.
There was opportunity for hardworking, determined men and women in the new world and they saw the realization of their dream in the lands of Pennsylvania.
This sense of adventure and risk is one that was rekindled in my dad, George Dickson Altman, however, in 1955 it was more risk than adventure.  After seven years of marriage and two children, Dad decided that there had to be more to life than working as a coal miner.  There was also the fact that my brother and I were frequently sick and a dry climate was recommended. After family discussions, it was decided.  The family was California bound.  Brother-in-law, Earl Neudorfer, had a brother, Ivan, living in California and the family was welcome.
George and his wife, Vivien Steffey Altman sold all of their belongings in preparation for the cross-country journey.  They said their farewells to family and friends and left on their six-day journey across the country.  They were going to a state they had never seen.  They were going to a state where they had no home.  They were going to a state where there was no job waiting.  It was to be a new beginning for George and his family but it was definitely a risk. 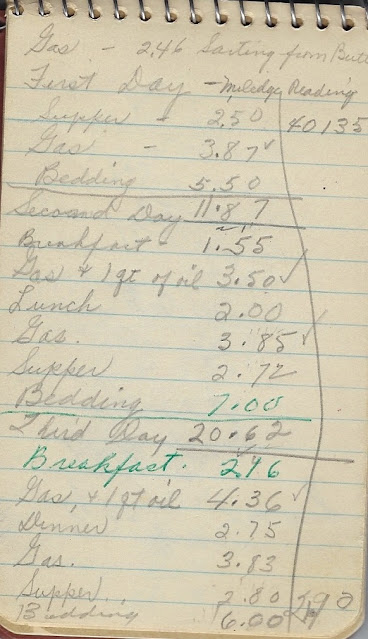 The journey ahead, while exciting, was scary and long.  Driving across country with their daughter, five-year-old Kathy, and their son, two-year-old Gary, was certain to have been a challenge.  It was late summer.  They had never dealt with such hot weather and the car did not have air conditioning.
Mom kept a log of expenses for each day.  While the cost looks minimal it was not in 1955!  Keeping track of expenses allowed them to monitor spending and budget as necessary when there was unexpected car trouble.  And, there was car trouble.  At each stop for gas a quart of oil was also purchased.  Toward the end of the trip, a new generator for the car was purchased for $20.00.  The total cost of the journey was $141.55, including the generator.
Arriving in Alameda was exciting.  As a five-year-old, I remember the house where we stayed until finding an apartment.  I recall the "red" walkways and scalloped edging in the backyard.  I recall the deep green trees with real oranges.  It wasn't like anything I had seen in Pennsylvania.
When an apartment was found, I was enrolled in first grade.  I had never gone to school in Pennsylvania.  Kindergarten was not an option for me as parents had to pay for their children to attend.  It was fall and exciting, as it was the beginning of the school year.  Prior to school, I had never really had playmates.  My interactions were with cousins and there were a lot of cousins!  This was different.  Each day when I got home from school I was allowed to play outside with the neighborhood children.  We played tag until one of the apartment windows was opened and a mom called out that it was Mickey Mouse Club time!  At the call, all of the children disappeared inside to watch TV, have dinner, and get ready for bed.
Dad was able to get a job in construction and the family settled into a regular routine.  But it was fall.  The weather in the bay area changed and there were many rainy days and weeks.  This presented a problem for the family, as when it rained Dad didn't work.  With no money coming in, a construction job was not going to be the answer.  Dad needed regular work.
I recall that Ivan knew somebody in Bakersfield.  They were also from Pennsylvania and were happy to have us stay with them until we were settled.  We were on the move again.  We traveled to Bakersfield to stay with Bill Spielman and family. 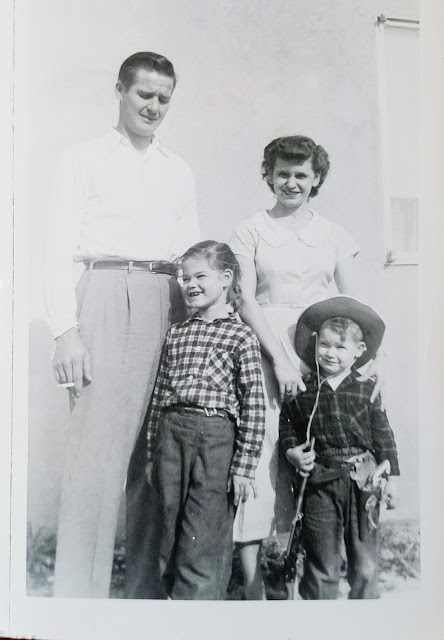 It was a good move. While in conversation with a neighbor, Dad was offered a job!  He was offered a job with the Douglas Oil Company.  Working in the oil fields would be another adventure and beginning for George.  Dad learned to be a steamfitter which led to his joining the Plumbers and Steamfitters Union.  They quickly rented a house, I was enrolled in school, and Mom found a job as a PBX Operator at Frame's Answering Service.  Things were starting to come together for the family.
Like his forefathers, George chose a new beginning.  Bakersfield, California became our family's home.  He would not have to work underground ever again!